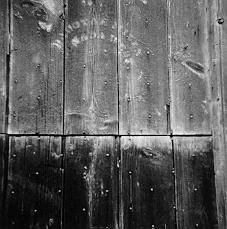 Dacotah Mills, Canada West
The Dakota Mill once stood right across the road from the Pegg Homestead on Cedar Springs Road. Until the late 1970’s the mill was still in operation, primarily in winter as a saw mill and during the summer as an attrition mill for chopping of feed grains. A wooden frame structure remains east of the water wheel that once housed a small cider press.

The original mill building was located to the rear of the site and housed the waterwheel. The front portion of the mill complex was once a general store located on the opposite side of Cedar Springs Road. It was relocated adjacent to the mill and used as a creamery. It then came to house most of the grist milling machinery. The saw house comprising a long narrow shed was constructed from the wreckage of the gun powder company plant which exploded in 1884.

The Mill was powered from the millpond on Twelve Mile Creek with the supply channeled along a mill race, tunneled under Cedar Springs Road and through another underground tunnel made of old steam boiler tanks. Water then passed through the foundation to an 18 foot overshot steel wheel housed in the stone casing. The wheel is 5 feet in width, with closely packed buckets carrying the water.  The overshot water wheel is particularly rare and valuable. These wheels were mostly replaced in the 1860s by more efficient turbine units.

So when was the Dakota Mill first built? It had a ‘Dutch’ door with the stenciled letters: “Dacotah Mill, Canada West.”.  This indicates that the door was marked after the 1841 Act of Union which created Canada East and Canada West out of Upper and Lower Canada.

The original Crown grant for the 100 acres including the Mill site was in 1826 to a Thomas Simpson, for his service during the Napoleonic Wars. Thomas Simpson sold to John Israel Taylor about 45 acres of that in 1833. In 1835, Taylor executed his last will and testament in which he gave to Adonijah Taylor “the sole and entire use and benefit of my saw mill and all things appertaining to the mill and lot during his life with this proviso or exception that he shall pay to my dear wife and child ... the one eighth of the profits thereof for twenty-one years...”

So the earliest recorded mention of the Saw Mill is 1835. And it was successful enough by then to include an allocation of its profits in Taylor’s will.  John Taylor may have built the saw mill in 1833 after acquiring the property.  However, the elderly Taylor already owned a substantial farm on a Lot at the corner of Cedar Springs Road and Dundas Street. So it is also likely the the saw mill had been built previously, possibly by Thomas Simpson while clearing his own lands, and then later sold it to Taylor to be operated as a saw mill business.

Or the saw mill may go back further to when the Crown had the lands first surveyed in 1819. Leonard Pegg told the story about how the mill’s name came about as follows. A band of Dakota Indians had camped in this area with a group of government surveyors. During the War of 1812, the Dakota pledged their alliance to Britain, so that may explain why this essentially American band was in the area. A young Indian girl became ill and could not leave with the band come spring. She stayed on, and one of the government surveyors’ families took her in to care for her. She later married one of the sons, and the couple settled in a small shack across the creek, just southwest of the present mill site. They struggled to build the mill. It is said that original owner named the mill after this Indian girl. 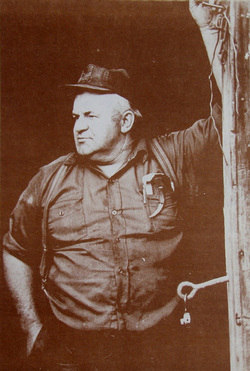 Leonard Pegg, 1978
After several owners, William Pegg purchased the Mill in 1911. It remained in the Pegg family until Leonard Pegg put it up for sale in May 1978. Born in the back of the Kilbride general store and steeped in the local history, Leonard Pegg had a dream that someone would buy the Dakota Mill for a restaurant and museum. In June of 1978, the Cedar Springs Community membership adopted a recommendation that no action be taken to purchase the Pegg-owned properties, principally for economic reasons.

Then in May 1979, the NEC circulated for comment a development proposal from Big Wheel Investments. Presumably named for the 18 foot water wheel, Big Wheel proposed to turn the Dakota Mill into a main-floor restaurant and basement-level tavern for 70 people, with parking for 42 cars. The water wheel would be renovated and kept in working order. There would be a display of pioneer artifacts and Pegg family memorabilia. They also anticipated parking 40 cars across the road on the Pegg Homestead site. Big Wheel Investments had obtained an option from Pegg to purchase the Dakota Mill site for $88,000, subject to obtaining NEC and other approvals.

The resulting widespread negative reaction may have proved all too much for Leonard Pegg. Unexpectedly on August 4th, the 54 year-old Pegg died of a heart attack while at the wheel of his car.

Later in August, the City planning department recommended refusing the Big Wheel application and other authorities called for more studies. One in particular was from the Ontario Ministry of Culture and Recreation which adopted the principle of re-using the old mill building, but only if it involved the conservation of the original building. Big Wheel’s proposal was to dismantle the existing structure, erect a concrete structure in its place while only utilizing some of the timber material for re-cladding. This did not meet the Ministry’s test for conservation.

On October 9th, John Cuddie a principal of Big Wheel Investments met with Cedar Springs resident Doug Taylor and produced a sketch and explained that the legal description for the Dakota Mill site set out a deed line for a triangular piece of the Dakota property that extended more than 100 feet into the first fairway of the Cedar Springs golf course. Presumably, Cuddie suggested, the Club did not want to lose part of its golf course, and would co-operate with Big Wheel Investments. Rather than getting co-operation, this meeting sealed the resolve of several members of the Club that Big Wheel had to be stopped.

Less than a week later, the Pegg Estate received and accepted an offer to purchase from Robert Otto, a lawyer acting in trust for some unnamed members of the Club. The $140,000 offer was for the Pegg Homestead site which was up for sale separately from the Dakota Mill site.

Then to (almost) everyone’s surprise, on Saturday night November 17th, the Dakota Mill building burned to the ground, in less than 20 minutes. The fire destroyed the mill building, but the stone foundation and the original iron water wheel and drive gear still remain. The newspapers reported arson was suspected. Who could have had a motive to burn the Dakota Mill? There was no fire insurance on the property, so insurance fraud was ruled out. Did someone think burning the mill would stop the restaurant development? Or just the opposite?

Big Wheel Investments reported the fire would not stop, but only require some rethinking of their plans. One item that they would not have to re-think was meeting the historic conservation requirements set out previously by the Ministry of Culture and Recreation. The fire had removed that hurdle.

But what about the Dakota Mill property? Five days after the Club members’ meeting, the Club’s lawyer David Lee informed the Pegg Estate that the Club intended to close the investment club’s purchase of the Pegg Homestead. He then made an additional offer to add the Dakota Mill site and he ultimately settled at a price of $31,000 for it.

How did the Club’s lawyer secure the Dakota Mill site? And get the price down from the $88,000 agreed by Big Wheel? We have to go back again to 19th century when the Hamilton (gun) Powder Co had owned all the lands in the valley. It appears that they were very concerned about workers always being safety-minded. In 1871, the company had a restrictive covenant put on title to the lands. The covenant stated that the owners of the Mill property from time-to-time “... shall not use any building now or hereafter to be erected on said lands as a tavern or a place for the vending of spirituous liquors ....” So the use that Big Wheel intended was not permitted. And the Club’s lawyer made it clear that the Club would seek to enforce this restrictive covenant. Big Wheel gave up its option.