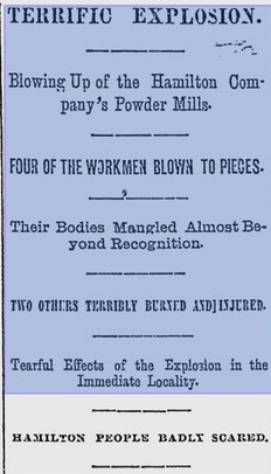 Midway through the noon hour, October 9th, 1884, people in the Hamilton area were startled by two loud explosions, one following the other in rapid succession. Some thought it was an earthquake. They looked northwestward and saw in the heavens an immense ball of dense white smoke rising up 200 feet. It hovered over the earth for a few minutes, then slowly ascended. But close behind it came a pillar of thick black smoke that roiled in vast masses several hundred feet higher and higher, and soon cast a leaden veil over the horizon.

The gunpowder mills of the Hamilton Powder Company located in this valley had blown up. About 50 persons rushed to the scene and speedily extinguished a fiercely burning fire. Huge rocks and trees were torn from their beds and hurled incredible distances. Trees were broken off by their roots and several others were severed cleanly as large iron plates had hurled against them, cutting them completely in two. An immense iron pillar weighing 400 pounds in one of the buildings was carried fully a quarter of a mile away.  The effects of the explosion fell like a grim veil, making all the surroundings look weird and unearthly.

Several of the men were away at lunch during the explosion. Four men were killed and two wounded (one died the day after). It was with difficulty that some of the bodies were found. Pieces of clothing fluttering from the treetops told of the awful flight through the air of the missing men. When found, they were stripped naked, blown hundreds of feet off into the bushes, with legs and arms broken, bodies burned black and one with a crushed skull. They were scarcely recognizable.  The wives and the 21 children of the killed and wounded men were heartbroken and the scene of the suffering women crying over the mangled remains of those near and dear to them was sorrowful and pathetic in the extreme. Thousands of persons in hundreds of buggies and wagons drove to the sight of the ruins that afternoon and for many days afterwards.

All this was as it was described by the newspapers at the time. See newspaper clippings at this link.

Now, let’s go back more than three decades to the beginning of our story. The early 1850s saw the start of a railway building boom in this part of Canada which required blasting powder imported from Britain and the United States.

Twenty-seven year-old Charles Kelly, as a local hardware dealer in town, probably had been an importer of black powder. Seeing an opportunity in 1851, he acquired Crown land located here at Cedar Springs. He cleared the forest and made what is now Grand Blvd from our front Gates to our swimming pool and erected several buildings on the route. The powder mills were located in the area of our tennis courts, with 30 horsepower of water-power provided by a dam and sluiceway. By June 1851, his Gore Powder Mills was producing black powder and it was being used extensively to build the Great Western Railway, from Niagara Falls through Hamilton and London opened in 1853 and to Windsor which was to open in 1854. 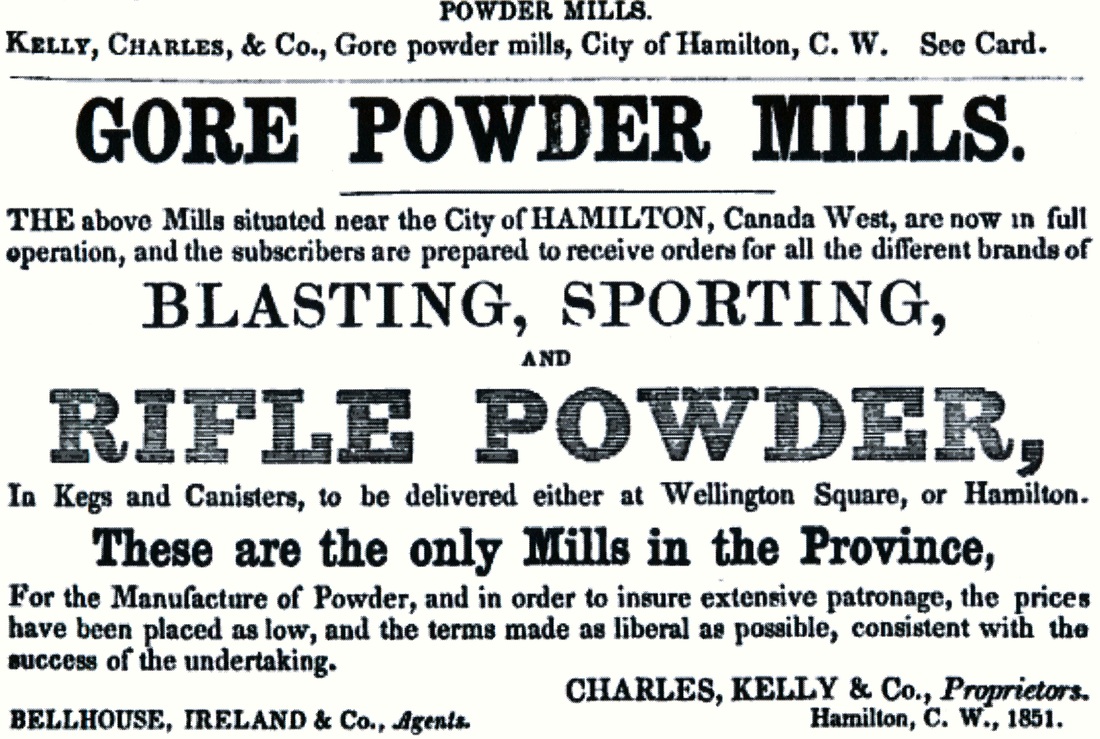 Canada Directory 1851
An ad in the Canada Directory of 1851 announced that the Gore Powder Mills were prepared to receive orders for blasting, sporting, and rifle powder, in cakes and canisters. Built at a cost of £3,000 (maybe $400,000 today), it had 10 employees and was capable of producing 20 kegs of powder per day. Located right here in Cedar Springs, Gore Powder Mills was the very first commercial powder mill in all of Canada. And Canada’s only mill to 1862, the peak of the American Civil War.

Gunpowder and blasting powder were made from a mixture of sulfur, saltpeter and charcoal. Sulfur came from Turkey and the saltpeter came from Chile. The charcoal was burned on-site in kilns, made from the wood of willow trees grown on site. Now you know why there have been so many willow trees in the valley.

In November, 1853, Charles Kelly’s mills exploded, with the shock felt 40 miles distant. As it happened in the middle of the night, there were no casualties. Charles Kelly then transferred the part of his lands containing the powder mills to a second better-capitalized Canada Powder Company, when it was formed in 1854. Kelly continued as an investor.

In 1855, Canada Powder Company built an enlarged powder mill at an expense of $200,000 (about $5 million today). It was capable of manufacturing 150, 25 lb. kegs of powder per day. The company expanded to occupy 140 acres of land in the valley. These Mills were in successful operation the first two years after they were built, and the company found a ready sale for all it could manufacture. Following the depression of 1857, the company was less successful and curtailed production, running the mills only for five or six months in the year. By 1859, Canada Powder Company mortgaged their lands to raise funds. Later, the mortgage was foreclosed.

James Watson, who came from Glasgow, Scotland about 1858, was the leader in organizing a third company in 1862 to take over the powder mills. Watson arranged for the newly-formed Hamilton Powder Company to obtain the lands from the mortgage holders and equipment of the defunct Canada Powder works. 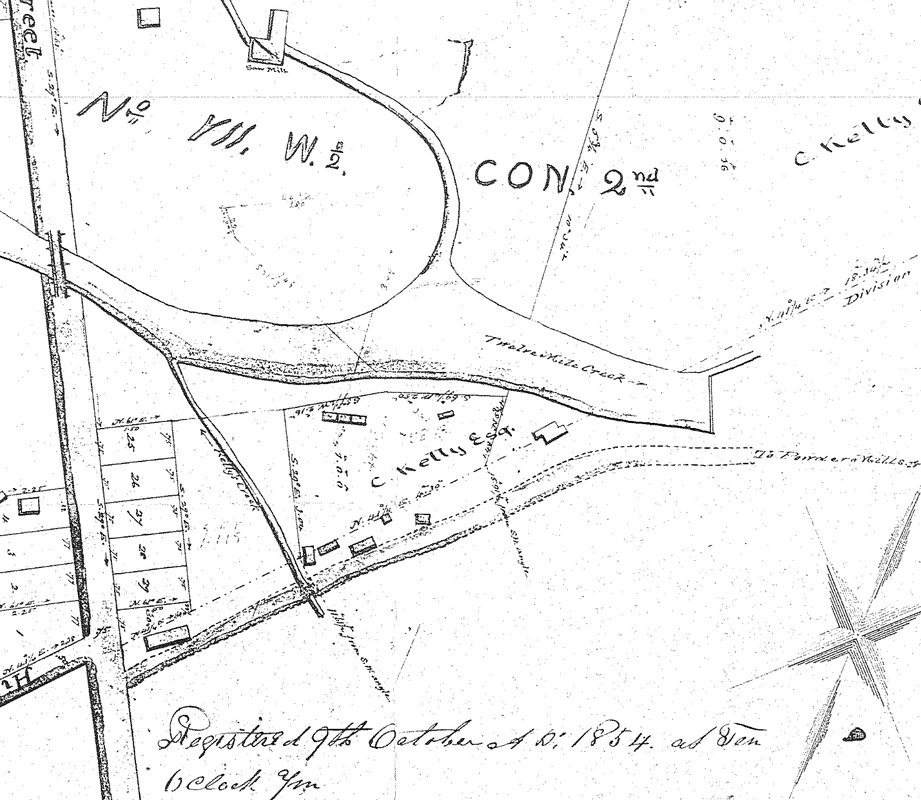 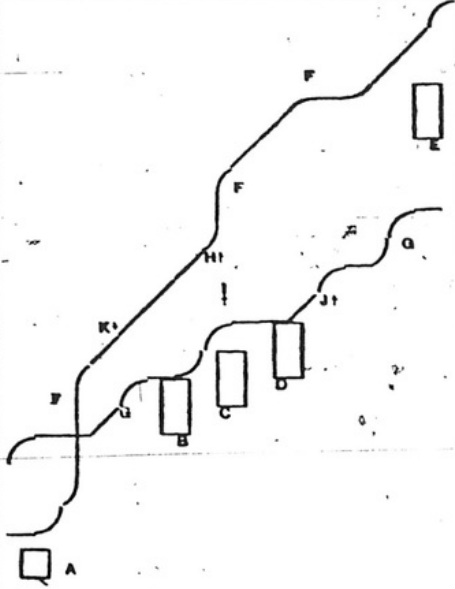 Here is what Cedar Springs looked like back then. As you entered from Cedar Springs Road, there was a cooper shop where the little 25 pound wooden kegs were made, the storehouse where the empty kegs were stored, the barn, the manager’s house and then the bridge over Twelve Mile Creek where it is today. Near our present-day tennis courts, there were large frame buildings a considerable distance apart among mature trees, for safety. Each building provided one of the processes required in the manufacture of the powder. The Cracker building, the Glazing Building and the Press building were all destroyed in the explosion. Each building was connected with the others by a narrow gauge wooden tracked railway, pushed by manpower. A large storehouse located on the north side of the creek was also heavily damaged in the explosion. About 200 yards downstream were low wooden structures, including the packing house, wheel house, pulverizing house, change house, mixing house, grist mill, refinery, engine house, dry pan and saltpeter house. At a great distance from all of them were the charcoal kilns. I expect that this is a far more substantial operation throughout Cedar Springs than you might have imagined!

The mills operated by water power for which the company had constructed two dams. One upstream we now know as the Pegg dam. The other one was situated close to the mill buildings where the swimming pool dam is today. Several acres of water were constantly in store and only awaited the opening of the sluice gates to permit the water to flow swiftly through the millrace to the great waterwheels in each of the buildings. The sluice gates were closed each night when the mills closed up for the day. Thus the dams retained throughout the night the water from a flowing Twelve Mile Creek.

The Hamilton Powder Company’s success culminated in 1877, when it secured an exclusive contract to supply black powder and dynamite to the syndicate that was building Canada’s national railroad. The Canadian Pacific Railway construction seasons of 1884 and 1885 would be spent in the Rocky Mountains of British Columbia, ending with the last spike being driven in November, 1885. In the autumn of 1884, Hamilton Powder Company received a large rush order for fine-grained blasting powder from the CPR. Accordingly, the mill production was increased from the normal quota of 250 kegs to an unprecedented 360 kegs a day.  This was a most dangerous powder to make because it entailed reducing already made dry No.1 powder to a finer-grained No. 3 powder. The men were overworked and the machinery was overheating. There was too little time for mopping up stray powder. And there was a growing menace posed by the presence on the site of 11 tons of highly explosive inventory in 960 kegs of powder.

After the explosion, the powder mills were never rebuilt. Hamilton Powder Company continued operations in Quebec as it was now based out of Montréal, having changed from local Hamilton ownership. The Village of Cumminsville, partially located on Club lands (below No. 8 Side Road), with its 200 inhabitants had been dependent on the powder mills. The Village was gone within a couple of years of the powder mill explosion. An industrious valley that had played a central role in the building of a Canadian nation, literally ended with a BANG!